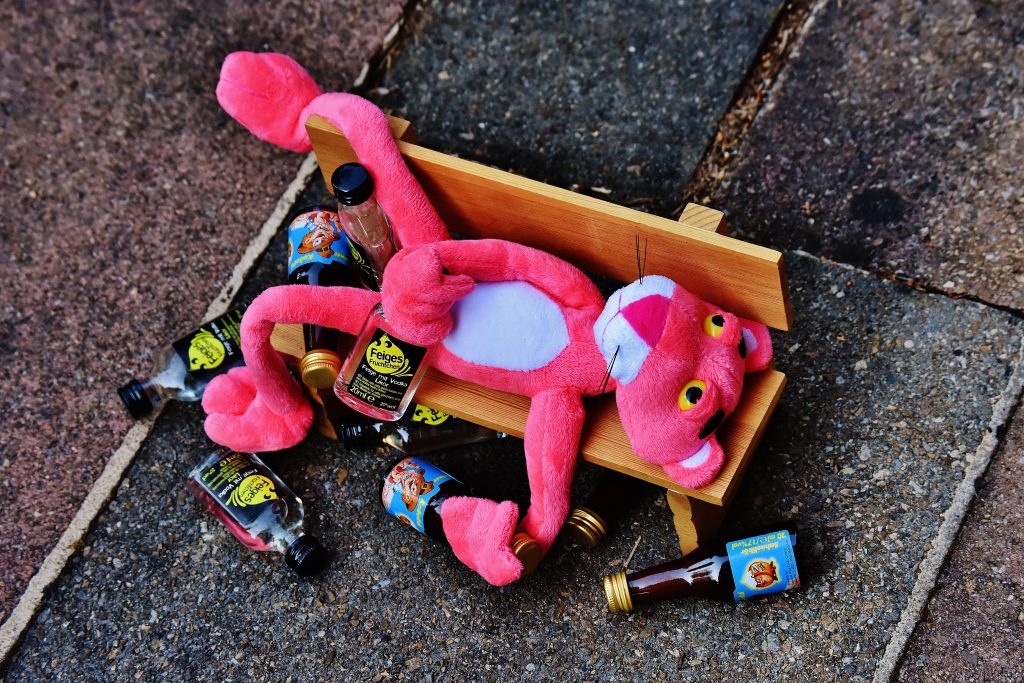 So I heard this statistic the other day that a third of 18-25 year olds are choosing to be completely sober. This – coupled with the news that big stars like Bradley Cooper and Brad Pitt are choosing to be alcohol free, and even our very own ultimate party girl Kate Moss turning her back on booze – has kind of got me wondering… Is sober the new black?

Back in the 90’s when I was a kid it seemed like everyone was drinking booze. I started drinking and smoking fags at the tender age of twelve (cringes)  because that’s what you did to fit in right? I wanted to be Sandra Dee so I could be popular and get the guy. I wanted to be part of Johnny’s secret beer drinking, Dirty Dancing crew. It was cool, attractive, exciting and rebellious.

So is it still about fitting in?

There’s no doubt that the mum blogging world is saturated with posts about ‘wine o clock’ and funny memes about – Mummy reaching for her gin at the end of a long stressful day. Hell, I’m even guilty of doing it myself. Drinking booze is deeply ingrained in our society and culture. I’m not sure about fitting in, but it’s definitely a shared human experience that we all seem to bond over. Right?

For me drink is a friend who has always been there. Since the age of twelve when I first got hammered on vodka round the back of the village youth club. Drink has helped me to celebrate and to comissarate. I drank when I was happy and I knocked back when I was sad. Holidays, weddings, birthdays and hen dos – woooo hoooo lets get pissed! I’ve used it to comfort, for confidence, to relax, to de-stress, to party and to have fun. (pretty much any excuse)  It’s been a massive part of my life and my personality.

I’ve had some of the most fun times EVER when drunk. FACT!

But what if it stops being fun?

If you follow me on Instagram you may have seen my stories about six weeks ago, where I told the tale of how I got totally smashed over at my friend’s dinner party – on a school night – and did a runner from a taxi at 3am resulting in me getting blacklisted by the taxi company.

These things do not go together.

Don’t get me wrong, I’m not totally beating myself up for doing a runner from a taxi. I can actually laugh about that night, even though I know that my actions were a bit silly and that blacking out at the ripe old age of forty is maybe – not cool. But come on, I didn’t kill anyone. I even called up the next day and apologised and paid my debt (plus a tip).

‘You’re not that bad when you’re drunk you know.’

Is a line my lovely friends will often say to reassure me when the drink demons start to get into my head. And I’m not. I never get violent or aggressive when I’m drunk. Quite the opposite. I’m mostly soppy and loving and fun. But the way I feel for days after a good sesh is – not fun.

Not only do I feel guilty and full of self-loathing, but these days I’ve actually started to feel quite depressed and anxious, and I’ve been finding it increasingly difficult to shake these feelings. When I was younger ‘the fear’ or ‘the clamp’ as me and my pals call it, would only last a day. Now I’m forty it can last a whole week.

Why would I keep putting myself through that?

I wouldn’t eat a bag of broken glass, even if it was the best high in the world, because it would really fucking damage my mouth. So why am I insisting on harming my mind with alcohol? It’s crazy. Let me think for a second – self induced mental health problems… erm… I think I’ll pass thanks.

Because when I’m in these alcohol induced, dark depths I’m actually a pretty shit mum (living my brand right there). I’m moody, snappy, withdrawn, distracted, lacking in energy and introverted. I can’t hear my children’s chit chat about their day when I pick them up after school because all I can hear is my all-consuming inner monologue – ‘You’re an alcoholic. You’re a bad mum. You’re a disgrace…’

Because guess what? I Googled it. And if there’s one good thing about the internet it’s that whatever you think or feel there will always be sufficient evidence to back it up. Even if it’s – ‘I’m addicted to sniffing cushions after people have sat on them’, you’d probs find an article somewhere to support it. Right? (just for the record I’m not a cushion sniffer addict)

So from what I’ve gathered from the good old internet, with alcohol addiction or alcohol dependency there’s a spectrum whereby if you are – drinking out of mugs in the morning, hiding booze, losing grip of your career, alienating and lying to family/friends or you have physical withdrawal symptoms like shakes and hallucinations, then yes, you’re probably about a nine or ten on the scale. If you are a number ten alcoholic you will literally put booze before anything or anyone.

This is not me.

I think I’m probably a two or a three.

That just makes me a bit of a heavy drinker? Yes? A binge drinker? Doesn’t it?

No matter what you want to call it, my drinking is problematic.

So I will freely admit I have a ‘drink problem’. My problem being that when I’m ‘on one’ (this could be for a number of reasons such as – stressed, tired, sad, celebrating or just in need of a good blow out) I binge drink without giving moderation, safety, health or the way I’ll feel the next day a second thought. And here’s the thing, the way I feel after drinking, mental health wise – for me – had started to become unbearable.

So am I drink dependant? Or addicted? I’d probably say – yes.

And I’m not ashamed to admit that.

Ethanol releases dopamine and serotonin in the brain and as humans we’re programmed to seek out those hits. It’s part of our survival mechanism. The day after drinking booze after that surge of happy chemicals we’re left a bit short, a bit imbalanced. That’s the reason it can make some people feel quite down. Ethanol is a potent, powerful and addictive drug and – shock fucking horror – all types of people get addicted to it. Me being one of them.

It doesn’t make me weak, or a bad person or a social pariah.

But somehow people silently judge those who cannot control their alcohol consumption. ‘She must have a problem.’ or ‘She’s a bit of an alchy.’ Are comments I’ve heard people make about others who maybe drink too much. There’s a real stigma. Somehow with nicotine or heroin it’s the drug that’s at fault, but with booze it seems to be the person. If you can’t go one night without a glass of wine or if you can’t moderate it’s you who’s weak willed or out of control not the ethanol that’s highly addictive.

Alcohol is associated with such positive life events and this leaves us defensive over its negative effects. Maybe it’s all the marketing surrounding alcohol over the years that’s to blame? Maybe it’s because it’s so ingrained and accepted in our culture? Because if you drink you’re ok, but if you don’t then you’re not normal. Maybe it’s because people are protective of their own drinking and would rather blame that person rather than their trusty, loyal friend – booze?

Anyway, I should probably shut up now, surely the world doesn’t need another Russell Brand. Most of you probably have a very healthy relationship with alcohol. You have fun with it, and moderate it and it doesn’t affect your mental wellbeing at all. I salute you and I’m very envious. Because I cannot moderate it. I’m an all or nothing kind of gal. I’m a – no drink, or a – ten drinks and flash your bum to a street full of strangers kind of lass (actual truth).

So currently, I’m giving nothing a go… again.

I’m on day 40 of a 100 day no booze challenge… I know… who am I? Peroni is actually going out of business as we speak.

Now then, if like me (and apparently 80% of the British population) you want to cut down or even quit. Here’s some of the stuff that I’ve found helpful…

Will I ever drink again? Who knows. To be honest I’m not going to put that pressure on myself. I’m going to take each day as it comes (oh God I think that’s an AA thing to say) and I’m just going to see how it goes.

Will not drinking make me boring? A social outcast? A preachy, smug, self-indulgent prick? Probably. But it will also make me down with the kids, happier and most importantly – a better mum.

… And anyway, I heard Danny Zuko divorced Sandra Dee because all she did was chain smoke tabs and chug down giggle juice like a seasoned Russian. (winks)