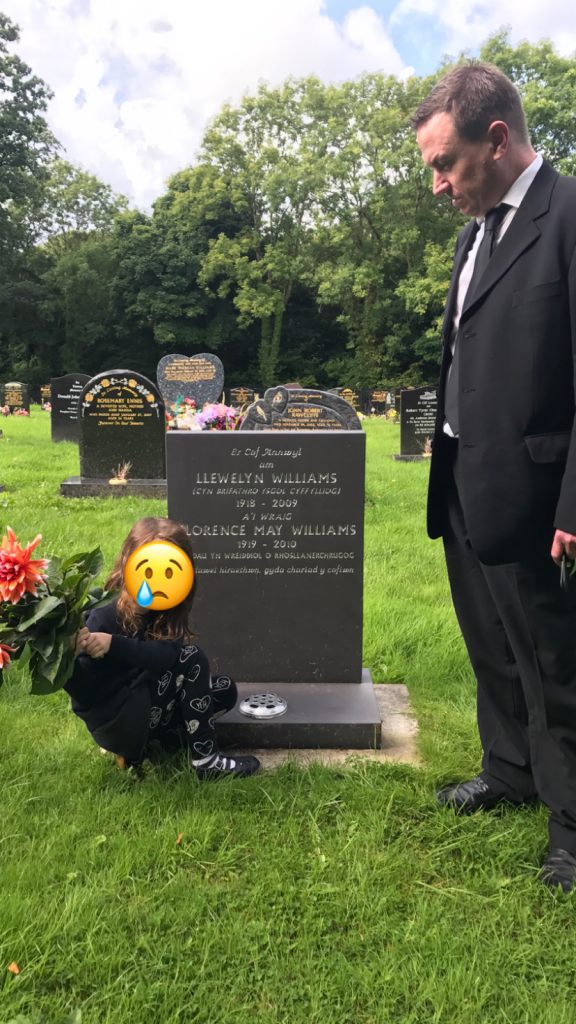 In the last twelve months my six-year-old and my four-year-old have lost three grandads… I know, it’s complicated…

(My Mum and Dad separated when I was about seven and so I have quite an extended family in a – ‘don’t ever ask me to draw my family tree’ type of way.)

First to pop off was my dad, their Grandad Roger. Then it was my mum’s partner – their taid (Welsh for grandad), and most recently my grandad – their Great Grandad Jack.

Let me take you back…

Exactly a year ago we were all at Greenman Festival. On the Saturday morning I woke up to about ten missed calls from my brother and my sister. They had been trying to get hold of me in the middle of the night to tell me my dad was dying.

Dad had suffered from MS since his early forties. He’d slowly declined into a pretty sorry state. He was in a care home. His quality of life was low, and so this day had been a long time coming.

Still, his timing was pretty shite.

I’d sunk quite a few festival lagers the day before and so I was feeling slightly fuzzy/horrendously hung over. Not at all equipped to deal with this sort of drama. I had glitter on my face and hadn’t showered for two days… Nice one Dad.

My girls were amazing whenever I’d taken them to the care home to see Dad. Unfazed and always cheery. They used to love pressing his bed buttons to make him go up and down. They liked climbing all over him, reading him stories and poking his nose to make him laugh.

I wanted to take them to his funeral, but was it the right thing to do?

I consulted the oracle (Google) and guess what? There’s a LOT of conflicting opinion out there. I made a mental list of all the reasons NOT to take them…

But hang on… maybe they are too little to understand, but what better way to teach them about mortality and death than this? Where else are they going to learn about it? Because that twee book about autumn leaves and the annoying dead little fox we recently borrowed from the library sure didn’t hit the bloody spot.

Death is an inevitable, unavoidable part of life after all.

Ok, so they will see me crying but what the hell is wrong with that? As long as I give them prior warning and explain why I’m upset. As long as I tell them that it’s -good to cry and let it out, because you ALWAYS feel better afterwards, then surely that’s fine?

Because guess what? Life isn’t all happy sunny days at the beach and it’s up to us to teach them that. Yes, there will be sad times, but that’s ok. It’s how you deal with those sad times that really matters. Pull your family and friends closer. Talk about how you feel, cry, hug it out but then dry those tears and find something to laugh about. Carry on living.

Funerals are boring for little ones. I mean, it sure aint soft play. But – tough shit! Neither is folding mountains of washing, or doing that Moana jigsaw for the millionth time or the agonisingly samey bedtime routine. But that’s the dullness I’ve got to deal with on a daily basis.

It’s important that they know it’s not all about them all the time. As long as I tell them – yes, the funeral will be boring, but it’s about saying goodbye and showing your love and support to the people left behind who are most affected, then surely they’ll just have to – SUCK. IT. UP!

I made sure I told my girls that I was proud of them for going to the funeral. That they had done a very kind and lovely thing. I told them their reward was the after party…

BECAUSE WHO DOESN’T LOVE A WAKE?!!

Unlike the funeral ceremony, it’s considered socially acceptable for kids to be at a wake, and so all of a sudden, they had lots of playmates. Plus a finger buffet…YES!!! Plus as many Fruit Shoots that they could fit into their tiny bellies because today girlies… Mum is on the Peroni… in the middle of the day… on a Tuesday… and she is too emotionally drained to say ‘no’ to anything… RESULT!!!

There is no denying having the kids at my dad’s funeral was good for me. You could say I selfishly took them as support for myself. And you’d be right. But slap me round the face with a childline leaflet and call me a prick, because I could not give forty fucks if people judge me for that. What’s good for me is good for them. End of.

Kids are a tonic – isn’t that the saying?

During the ceremony at my dad’s funeral, my four-year-old, who has no ‘volume down’ button was especially tonic like. My sister-in-law had bought her a sad emoji pillow and she kept sticking it on her face and looking at me, which made me giggle quite a bit. I know my dad would have found it amusing too. Also when the coffin was lowered down ready to be cremated, she looked at it perplexed, then at me, then bellowed –

‘Why is Grandad Roger going down into that hole?’

Stifled laughter and smiles from all the mourners within earshot.

She then insisted we go and look into said hole to the point I thought she was going to launch herself into it, which would have been awks. Funny and great blog content, but awks.

She was equally hilarious at funeral number two – my mum’s partner’s funeral. As we were all waiting solemnly outside the crematorium for the coffin to arrive, she whipped her tiny head around as if frantically searching for someone.

‘Is Taid coming to this funeral?’ she said.

I couldn’t help pissing myself.

‘Erm… yes.’ I said as I watched the coffin car containing his body pulling into the cemetery. ‘Here he is now.’

So, should you take small children to funerals?

As with all parenting matters, it’s all about personal preference. For me, my kids and my family it was the right thing to do. My kids attended their third funeral in the space of a year last week and they were – unfazed, well behaved, sensitive, supportive, respectful, thoughtful, sweet and most importantly – funny…

Having said all that, let’s hope that’s it for a while now eh?

One thought on “Should small children go to funerals?”