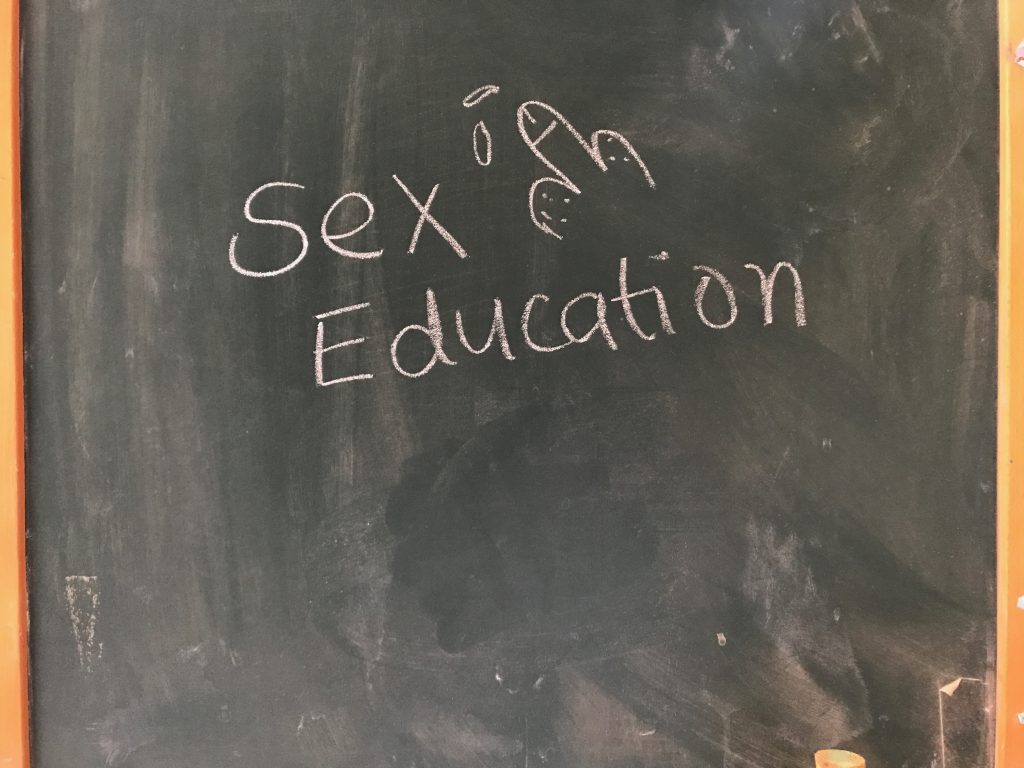 When I was a teacher, I loved teaching Sex Education.

However… not all teachers shared my enthusiasm. Sixty year old, male D.T. teachers in their carky corduroys did not feel comfortable teaching it. Traditional, aging female R.E. teachers in their tweed skirts and beaded necklaces squirmed at even the thought.

You see, there are no specific Sex Ed teachers. What happens is – all the teachers get given a scheme of work from the Sex Ed coordinator, and everyone has to teach it. Silly really as I know for a FACT those who were not comfortable teaching it either didn’t bother, or did it badly.

But I loved teaching the kids about sex.

As you have probably gathered by now, not much embarrasses me. I can talk openly and frankly about almost anything. I couldn’t give a fiddler’s fart. In fact the juicier, cruder and more taboo the better.

I’ll never forget teaching Sex Ed to my little Year 7 reg class during my first job. It was a challenging school in a disadvantaged area of the Welsh Valleys. The kids were rough little diamonds and I bloody loved them.

I’d been given these really crappy worksheets, which if I’m totally honest, I hadn’t even looked at, and so the morning I took that class I had no idea what was about to happen.

**Names and identities have been changed here for obvious reasons**

Cut to me reading through said worksheet, which was titled:

‘Changes that Happen During Puberty.’

The list started off pretty tame. Noted down was stuff like – ‘increased body hair’ and ‘periods’, but then a little further down, in bold comic sans, were the words – ‘wet dreams.’ Cue awkward giggling and embarrassed tittering.

Me:(frantically thinking of the right thing to say)‘Well… it’s when you wake up and you’ve wet the bed, except it’s not because you’ve weed, but because you got sexually excited.’

Knowing nods from some of the boys. Other innocent little lambs look on horrified, whilst the rest of the class just stare down at the table red faced.

Little Johnny: ‘Oh, I know now. It happened to me once when I was staying over at my Aunty Rita’s.’

Lots of laughter, coupled with much respect from me. Johnny’s openness and willingness to share was something to be admired.

I carried on reading the list and got to the next tricky part, which rather abruptly said – ‘Lengthening of the vulva.’

I considered the question for a minute and then decided to draw a diagram. I reached for a white board marker and drew a rather simple cartoon of a vagina on the whiteboard, with an arrow pointing to the area in question. I hoped to fuck the headmaster wasn’t on corridor duty.

Little Johnny: ‘Miss, Miss! I know another word for that!’

(Little Johnny announced the word loudly and with conviction)

‘Correct’ I say. This kid is like my partner in crime I thought. I wondered if there was any chance I could adopt him?

Whispers and looks of terror amongst the girls as they imagined the horrors of what lay ahead.

I tried to comfort them.

‘Don’t worry,’ I said, ‘Your vulvas aren’t going to start swinging down round your knees, flapping in the wind or anything. They may just grow a tiny bit… I think.’

I actually wasn’t quite sure myself. I mean, I’ve never experienced such lengthening. Then I remembered the Sex Ed coordinator (and therefore the creator of the worksheet) was a man. And so there we bloody have it.

As the class left I got a surge of pride that we’d talked so openly and frankly about such an important subject. The euphoria however, was short lived. My stomach sank as I tried to wipe the board and realised that I’d used a permanent marker instead of a whiteboard one. I wondered how the fuck I was going to explain this to the Maths teacher who was in there next.

So that was Sex Education when I was a teacher, but what about now? Will I be able to be as frank and open with my own children?

This week I actually had no choice. Let me explain…

You see earlier this year we got a beautiful new Whippet pup, called Blue. We always wanted two dogs but thought it wise to get one to begin with. Then this week I had the ingenious idea that we could breed her and let her have a litter. We could keep one puppy and rehome the rest. The idea hit me when I bumped into a lovely dog walker, who also has a Whippet. A lovely, sandy coloured male called Wilf.

As Bluey and Wilf bounded around playfully in the dewy grass, I was sure somewhere in the distance I could hear the faint sound of violins playing. I became convinced I could see Bluey flirtily tossing her ears at him. The little cock tease. It was then I noticed that Wilf had ball bags.

‘You haven’t had him neutered?’ I asked.

‘No.’ said the lovely dog walker. ‘We were actually thinking of breeding him.’

BOOM. It was meant to be!

That afternoon driving back from the school run I excitedly told my six-year-old and four-year-old the idea.

Now, my kids already kind of know how babies are made. Once when my husband was in the bath with them, they prodded him in the testicles and asked –

‘Daddy what are those two things underneath your lampshade?’

So we told them. We said – that’s where Daddy keeps his seeds. He gave Mummy some seeds, and that’s how I grew you in my tummy. And that was that. They didn’t ask anything else, they just accepted it.

However, they now needed answers.

‘How will Wilf get the seeds from his testicles into Bluey?’ My six-year-old asked.

‘Well, he will have to get on top of her, like she is giving him a piggy back and then he puts his willy inside her peggy.’ I say. Because what else am I supposed to say? That’s what happens. Right?

‘Is that how Daddy got his seeds into you?’ she asked.

I glance in the mirror. She is squinting. The cogs are turning fast.

‘How long did Daddy leave his willy in there?’ She said.

Well this is awkward.

‘What, like as long as an episode of something on Netflix?’ she says.

I actually snot out of my nose at this point. I mean Daddy is pretty good, but lasting a whole Episode of Better Call Saul? Don’t think so.

‘So yeah, that’s how babies are made.’ I say ‘A man puts his penis in a woman’s vagina. It’s called sex.’

The kids laugh in a WTAF kind of way. I keep watching my six-year-old in the mirror. She is smiling and crinkling up her nose up at the thought of Daddy with his willy in Mummy’s peggy. It’s a lot to take in.

So that was that. Our first ever real – ‘Mummy where do babies come from?’ moment.

And now they know. Was it the right thing to do to be so open and frank? I think so. I had no choice really. I’ve since told people this story and some have looked quite shocked and horrified at my openness.

Isn’t it best just to get it out there in the open whilst they’re young? It’s such a natural, biological, beautiful part of life. And besides, I don’t really want to leave it up to some awkward, bumbling old male D.T. teacher to educate them about lengthening vulvas and wet dreams.

Funny thing is, they’ll probably know more than any of those stuffy teachers when it actually does come down to it!

Thanks for reading. Please head back to my latest Insta post and add a comment. Maybe you could also tag a friend who you think may enjoy? That would be FAB!