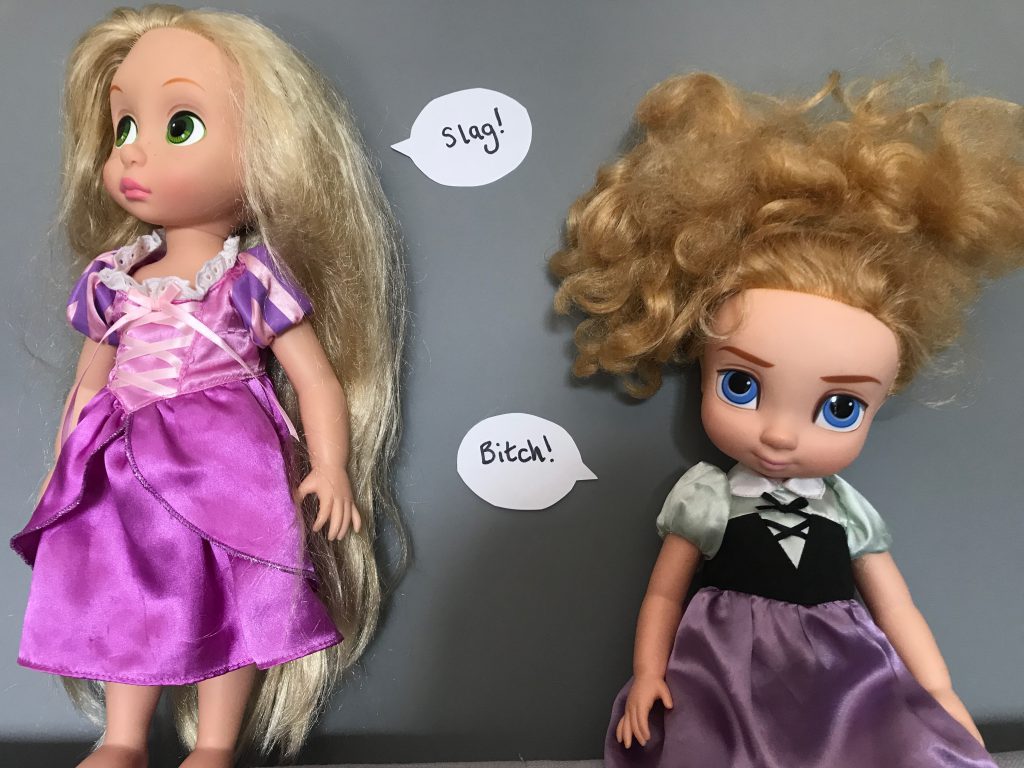 A short essay on why females bring other females down…

When I was head of year in a secondary school, about 90% of my time was spent sorting out bitchiness between girls.

Now that my little girl is in school, sadly it is evident this sort of crap is still going on.

My six-year-old has had a bit of a rocky time so far with friends in school. Maybe because she’s a bit different from the other girls? She has an old head on her shoulders. She’s never been into Disney princesses. Instead, she has a mild obsession with Pokemon.

However, at the end of last year, she came home telling me that she finally had a ‘best friend.’ Let’s call her Megan. Things were great for a while, but then a few weeks ago a new girl joined the class. Lets call her Nancy. Now my kid and Megan made a pact the day Nancy started, that they would be the first to ask her to play. I thought this was extremely kind and I was very proud.

Cut to this week…

… And three has definitely become a crowd. My little girl’s equilibrium has been shattered. Her ‘best friend’ is now playing more with the new girl than with her. I can see this has made her jealous. She comes home telling me eye-rolley tales about Nancy. There has been some – ‘telling on her’ for this and that. Nancy is the competition. She is a threat. Is my kid subconsciously trying to bring her down? No. Surely not. My daughter is a nice girl.

But, this sort of thing has gone on since we were in school, right? And since our mothers, grandmothers and even great grandmothers were there. It goes on between females in the workplace. There are textbook matriarcal power struggles within families (erm, hello mother-in-law), and now naturally, this school playground mentality is in full swing between women online.

I suppose it would be good to try and understand why?

I did some research. I read some articles by psychologists, and from what I can gather…

(See article by Meredith Fuller, psychologist and author of Working with Bitches, Identify the Eight Types of Office Mean Girls and Rise Above Workplace Nastiness)

Some of the above, does explain how my little girl is feeling. Right? But what about grown women?

University professor, Tracy Vaillancourt undertook a scientific study back in 2011 which proved that – women were evolutionarily programmed to act aggressively towards women who were perceived as ‘sexier.’

Not my words peeps – It’s science.

This got me thinking. Is it then – something instilled in us since caveman… sorry… cavewomen days?

Let’s think of it in basic animalistic terms. Like we are lionesses living amongst a pack of lions. When a more attractive or desirable female enters the pride, are women just instinctively growling and showing their teeth to ward off the competition? Alpha females locking horns in the same way alpha males do?

Do women who put down other women see everything and everyone as a threat? Do they see other women who are more successful, more aesthetically pleasing, seemingly happier than them, and try to subconsciously scare them off? And are victorious, heads-above-the-parapet women considered fair game in this unforgiving, dog eat dog… er sorry… bitch eat bitch, world? Because they are the biggest threat?

Studies have demonstrated that girls are more likely to use gossip, social alliances and social exclusion to police other women’s behaviour. And it is proven, that indirect aggression (bitchiness) among females is used as a socially acceptable way to compete.

Of course this is an arguably damaging, non-feminist, sexist view that all women are nasty or bitchy. We all remember Trump labelling Hillary Clinton a – ‘nasty woman’ during the presidential debate back in 2016, and how misogynistic and archaic that was. Right? (link to Guardian article here)

When challenged on her scientific study (not opinion but FACT remember), Professor Tracy Vaillancourt defended it by saying – ‘You can’t change what you don’t acknowledge.’ She suggests that maybe by drawing attention to this ‘bitch eat bitch’ attitude we are better equipped to overcome it?

According to Dr Pat Frankish, a consultant clinical psychologist, the compulsion to bring other women down originates from childhood.

“Something happens that triggers a relatively infantile response, belonging to the pre-socialisation stage of development. Not all women attack others, so the implication is that those who do are insecure in their attachments and are triggered by what they see as someone being better than them, or getting more attention than them.”

Here’s some food for thought…

So, these are the things I’ve been implementing with my six-year-old this week. She’s a nice girl and I have no doubt things will work out. She’s just learning how to deal with all these instinctive and complicated feelings after all.

But what about us grown ups?

Are you a female who is spending time bringing other females down? Are you wasting time harbouring negative feelings of anger, envy or annoyance towards other women? As we have learnt, the reasons for this are evolutionary, natural and complex.

But we are not animals, cavewomen or lionesses. We are intelligent, advanced, millennial females. We must acknowledge that as females there will be times where our instinct is to compete with other females. To subconsciously warn them off because of fear. To bring them down because of jealousy.

But surely if we recognise this, we can all strive to change it.

Thanks for reading. Please head back to my latest Insta post and add a comment. Maybe you could also tag a friend who you think may enjoy? That would be FAB!