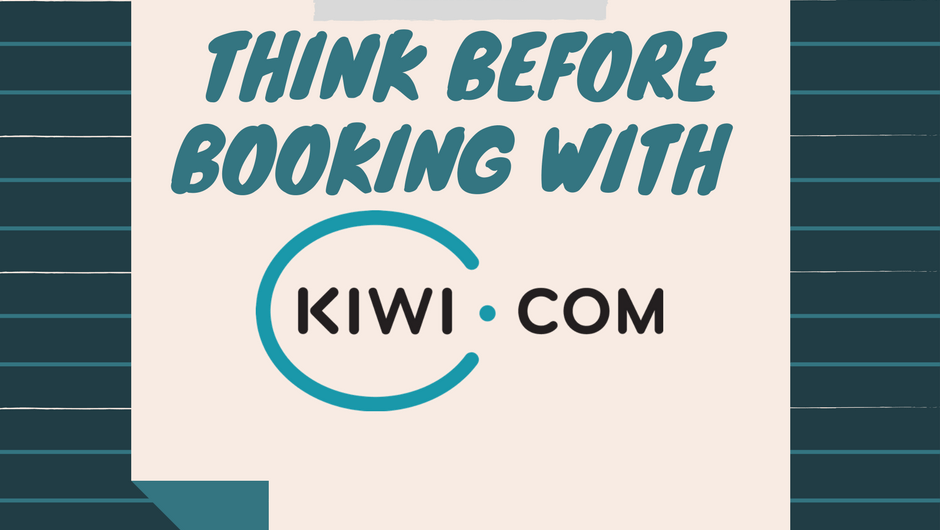 I am writing to tell you that your company – kiwi.com (in my opinion) is a total pile of shite.

I don’t give a turtles turd that you have been named ‘Forbes Czech – 30 under 30’ because quite frankly, I have no idea what that means.

I also couldn’t give a fiddlers fart that you ranked 7th in the ‘Deloitte Technology Fast 500 Awards’, because that will not make up for the total balls-up you and your company recently made at my expense.

I do however care that you made $9 million on sales of $805 million in 2017, because that may mean that you can afford to throw a little compensation my way for what I am about to divulge…

Your shambles of a company (in my opinion – best to cover myself legally right peeps?) totally ruined my fortieth birthday – FACT.

Let me take you back to early January this year, when I started planning a weekend away in a villa. Our party was to include myself, my husband and ten of our best friends. The reason for this trip was to celebrate my special ‘once in a lifetime’, milestone birthday.

We decided on Zakynthos. It has always been my dream to visit Greece. I wasn’t asking for much. I didn’t want to be sipping Moet on the back of a million pound yacht somewhere off the coast of Dubai did I? No. I am a simple woman with small dreams Oliver. Washing down a few olives with some Greek beer by the pool with my besties was all I asked.

Later that month, we all got online and searched for flights through Skyscanner (could they be partly to blame here too? We trusted them and didn’t think they would ever feature any dodgy, crook like companies).

Our party of twelve, booked flights individually on different days and with different companies. Two of our party clicked through and booked with yourselves, kiwi.com, because you came up cheapest.

However, when I say booked, I mean they paid kiwi.com over £400 each and you took their money, but then you did nothing else. You did NOT book them their flights with the airline and so they did not make it to Greece with us.

You might need to flag this up as a ‘training issue’ Oliver babes. Maybe a glitch in the ‘smart algorithmic technology’ (your words). Stupid algorithmic technology if you ask me. Seeing as you’re a ‘travel company’ it’s kind of quite important that your customers actually do go somewhere. Bit difficult if you haven’t booked them onto a flight. Right?

Just out of interest why was this? My two friends were told at the customer service desk that there were no seats left on the plane but this was a total lie as when I walked up and down the plane there was a woman somewhere near the front with two free seats next to her. I asked her and she confirmed this, so why were my friends not given these seats? WHY?!!! Can you see why I am a little cross here Oliver?

As you can imagine at the time I was devastated. I cried. I got angry. I stewed and mulled it over for days. Weeks.

My two friends were offered alternative flights the next day. They were told they would receive a confirmation email but they never did and so they were unwilling to travel back to the airport and risk being turned away again. They have since been offered a refund by kiwi.com, but it’s just not good enough is it Oliver? A refund wont change the past. A refund won’t magically mean that they were they with me to celebrate my fortieth birthday.

Also what about the expense of the airport transfer, the villa cost, their bus back home, all the phone calls back and fourth to your call centre? We’re talking hundreds of pounds here. A good chunk of their hard earned wage. They are decent people who had saved, sacrificed and looked forward to this event for months.

I’d like to end this open letter to you all at kiwi.com with some quotes I found online from interviews with you Oliver, about your company:

Does that include all the refunds hun? For customers left stranded. Their dream holidays, weddings, honeymoons, trips of a lifetime that were planned months, maybe years ahead – ruined?

‘The main thing I’ve learned is that no matter what happens, you need to be fair to all the people around you: team members, partners, competitors, family…’ Oliver Dlouhy

What about being fair to your customers? Leaving two of our party behind certainly didn’t seem fair. Taking their money and not booking their flights? NOT FAIR!

‘I therefore believe my biggest challenge is to remember to set high expectations and to know that with all of my passion, hard work and perseverance, I can achieve what is impossible.’ Oliver Dlouhy

Paaaaaaaah!!!! (rolls around on floor laughing)

‘We know there is a very large market opportunity, and we have built a product that we think is useful and that hopefully delights consumers.’ Oliver Dlouhy

Well I think we can safely say this customer is not delighted. Quite the opposite in fact.

‘We focus on our customers.’ Oliver Dlouhy

No you don’t. Seems to me you focus on profit and investors.

‘We really want to disrupt the way that travel is researched and booked, we don’t want agents to just direct you to the carriers or hotels that they have exclusive deals with, rather we want to be a technology provider that gives you the widest choice and value for you to decide what you want to buy and when.’ Oliver Dlouhy

So how do we ‘move forward’ as so many wankers in this world of business say Oliver? No refund or compensation will ever change the past will it? We can’t un-ruin my ruined fortieth birthday can we? Unless you invest in a new travel business? I suggest maybe time travel.

Anyway let me know your thoughts.

P.s. I take it you’re not ATOL protected? (No idea WFT that means either)

P.p.s. Am I right in thinking you recently went on a luxury family holiday to Croatia? How would you have felt if two of your party – let’s say your wife and son, didn’t have a seat on that plane? Imagine yourself all alone Oliver, sat beside the sea staring into you goulash thinking about what could have been. How would you have felt? You get on the naughty step and have a think about that now.

Please tag a friend on Insta, Re-Tweet or share on Facebook if you’ve ever been ripped off or shat on by a travel company or airline, and head back to my latest Insta post with your stories or comments. If I can save just one person from having their holiday ruined by a company like kiwi.com then I’ll be happy… POWER TO THE PEOPLE!!!